Although the focus of climate change debates has shifted to the ability of climate models to accurately predict the impacts of CO2 in the atmosphere, surprisingly few people really have a firm handle on the much simpler question posed above. People love to debate and back themselves up with all sorts of information provided to them from other sources, but few actually want to put in any effort to make the transition from “knowledgeable” to “knowing” on any part of the subject. To be honest, this included myself, as I had always accepted that climate scientists had a pretty good handle and that a simple question lie this doesn’t need my analysis. Then I realized that as a chemical engineer who works in the oil and gas industry, this was a problem that I could find a solution to with a combination of Excel and Google in about two minutes. Although this also shows that this question really doesn’t need me to look into it, I needed something to do and Math can be quite a soothing activity. 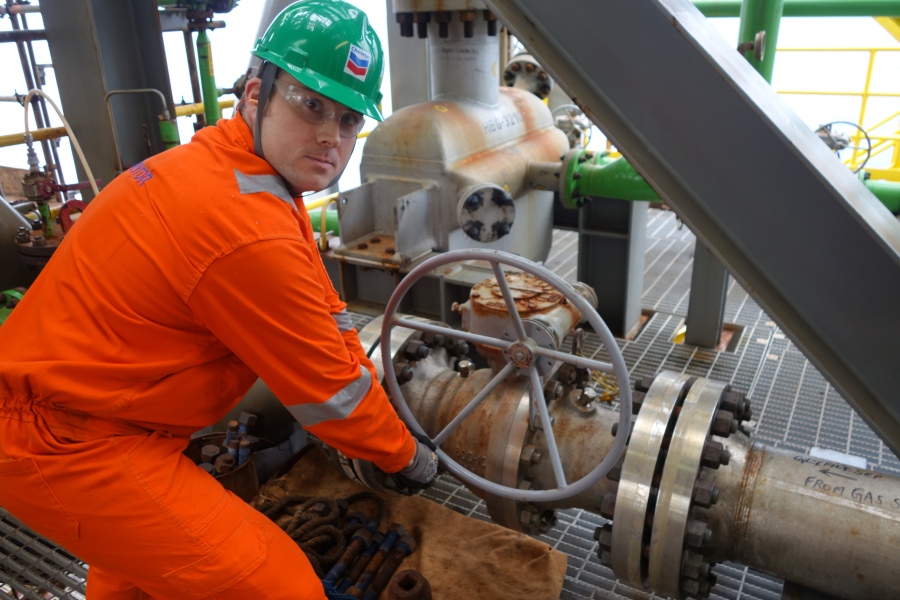 This two year old photo of me pretending to turn a valve doesn’t actually have anything to do with this post, but there is a lot of math coming up so I figured I should put in a picture to liven it up. Photo credit to David Parham.

As with any scientific problem, the standard way to solve a question like this is to disprove that the opposite (usually referred to as the “null hypothesis”) could realistically happen. In our case the null hypothesis is that humans do not emit enough CO2 to significantly alter the makeup of the Earth’s atmosphere. Given that the increase in CO2 content of the atmosphere has been pretty widely documented as increasing at a rate of around 1 part per million per year since 1950[i], this should be a pretty straightforward exercise. No p value hacking or significance bands creation will be required for this one.

Having spent the last decade in the oil business, I know that the worldwide consumption of oil is about 90 million barrels per day, which translates to about 3.8 billion gallons per day, or 1.4 trillion gallons per year. To conservatively estimate the amount of CO2 this amount translates to, I will use an intentionally low estimate for the density of this oil (A lower estimate for density will give a conservative lower estimate for Carbon content). My assumption will be that this is all light crude with an API of 40, which is oil industry jargon for saying that its specific gravity is 0.825, which means each gallon will weigh about 6.9 pounds[ii]. I will also purposely assume that the carbon content of this oil is very low, using the same 75% carbon content as pure Methane (typically referred to as natural gas). In reality, both numbers will be higher, but in order to disprove our null hypothesis the best path forward is typically to make only assumptions that are clearly favorable would help the null hypothesis. This way, when the null hypothesis is disproved, there is very little wiggle room for it to fight back.

From chemistry, we know that every gram of Carbon (molecular weight 12) will yield about 3.66 grams of Carbon Dioxide (molecular weight 44). This is due to the weight of the two additional oxygen atoms added to the Carbon atom each weighing 33% more than the Carbon atom itself. Putting all this information together, I gather that from oil alone, about 26,100,000,000,000  pounds (2.61 x 10^13 pounds) of CO2 are released each year. This does not account for the fact that oil only represents between a quarter and third of the entire worldwide energy picture, and that the two other most significant chunks, coal and natural gas, would likely add a similar amount of emissions to the total.

Now while that amount of CO2 sounds huge, so is the atmosphere. One way you can tell the atmosphere is so huge is that it exerts a pressure at sea level that amounts to about 14.7 pounds of force for every square inch of the earth, because a 1 square inch rectangular prism stretching from the sea level all the way to the edge of Earth’s atmosphere will contain approximately 14.7 pounds of air. You can use this same trick to show that every 2.31 feet of water depth adds 1 psi (lb/square inch) to the water pressure. 1 square inch is 1/144 square feet. Multiply this by 2.31 feet and the density of water (62.4 lb/cubic foot) and you get one pound. This is why atmospheric pressure gives us a great way to simply calculate the weight of the atmosphere. If we can calculate the surface area of the earth in square inches, we can multiply this atmospheric pressure of 14.7 pounds per square inch to estimate the weight of the atmosphere. I should note that when I say this is a “great” way to calculate Earth’s atmosphere, what I’m really saying is that it is easy. In engineering easiness is tantamount to greatness.

Google tells me that the Earth has a diameter of 7915.5 miles. Assuming Earth to be a smooth sphere, the surface area would be equal to 4 times Pi times the square of the Earth’s radius (Area = 4 x Pi x R2). Of course, we will need to cut the diameter in half to get the radius, then multiply the radius in miles by 63,360 to convert it to inches (there are 5280 feet in a mile, and 12 inches in a foot, the product of which is 63,360). All of this math tells us the surface area of the Earth is about 7.9 x 1017 square inches, meaning the weight of the atmosphere is 14.7 times this number, or 1.16 x 1019 pounds. Dividing our earlier CO2 amount generated by this number and multiplying by a million would give us the amount of increase in annual atmospheric CO2 concentration that could be caused if all of the oil we burned simply stayed in the atmosphere as CO2. This ends up being 2.2 parts per million (ppm) per year on a weight basis, or 1.5 ppm per year on a volume basis. Gas concentrations are generally reported on a volume basis, and since CO2 is heavier than air (Molecular Weight of 44 compared to 29 for air), we’ll use the smaller number.

So there you have it, our conservative estimate says that our burning of oil on its own could theoretically increase the CO2 concentration in the atmosphere by 1.5 ppm per year, and since oil only represents a fraction of the fossil fuels being burned, the actual amount is likely several times greater, much higher than the 1 ppm per year stated earlier. I suppose the next question is “where is all that CO2” going? Or perhaps the next question is whether the rate of increase in CO2 content in the atmosphere is accelerating consistently with the increasing rate of global energy consumption. The data is out there, all we need to do is look at it to go from “knowing what climate scientists say about climate change” to actually “knowing a little bit about climate change.” Then again, maybe we’ll just keep having snowball fights on the Senate floor[iii]. That does seem more fun.

Feel free to check my work and conclusions above. This post has not been subject to peer review, and I can’t guarantee I didn’t mess something up horribly. I was a bit surpised by the result myself, so I would appreciate the feedback if someone cares to tell me how I went wrong if I did.

I’m still not sure what I want to do with this site, but I do like to write occasionally. If anybody has any suggestions for Engineering, Science, or Math related topics for future posts please leave a message in the comments or email me at cory@veryprofessionalengineer.com

[ii] Water weighs about 8.34 pounds per gallon, so oil with a specific gravity of 0.825 will weight 8.34 x 0.825, or 6.9 pounds per gallon. API gravity is an archaic measurement of specific gravity widely used in the oil industry born out of a desire to have a measurement of density that increases as oil gets lighter, since lighter oil is generally more valuable. Specific Gravity is defined as 141.5/(API Gravity + 131.5).

[iii] I’m allowed to make a joke at Senator Inhofe’s expense, we went to the same university. However, I must note that the Senator went to the business school, and to my knowledge did not spend a lot of time in the engineering building.